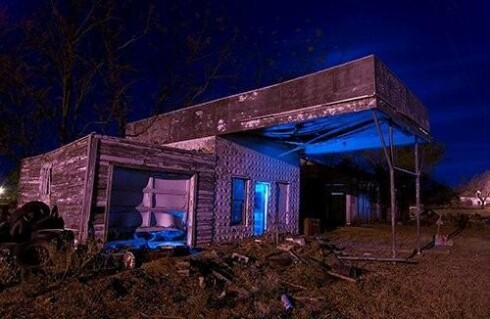 Cosmo and Silvia make it to the western most edge of Oklahoma and stay in a motel near Texola, Oklahoma for the third night of their journey. This nearly abandoned ghost town sits on the Oklahoma-Texas border.  This town dates back to the 1900’s and it prospered in the 1930’s with cotton production and the arrival of Route 66.  It began a rapid decline in population and economic growth in the 1940’s and today it has a population of less than 50 people.  A “dead place…in between the places that still lived.”

Their stay in such a ghost town couldn’t be more appropriate, for it is here that Cosmo initiates a conversation about death. This is triggered by his encounter, earlier that day, with a woman approaching her own death. During this conversation, he brings up the reality that the two of them almost died a few days ago, and he embraces the finite nature of his human life.  Silvia tells him that she has been embracing this reality throughout her life, and that her awareness of the finite nature of her life has motivated her to cultivate a rich inner life, which she mostly does through her painting.  Her words cause Cosmo to contemplate the nature of his soul and the importance of developing this part of himself for his own happiness.