Something He Could See Himself In: free short fiction 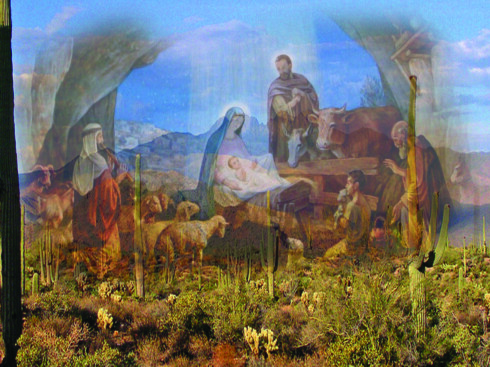 SOMETHING HE COULD SEE HIMSELF IN

The empty spot on the bottom of Tattoo Tommy’s back was the only tattooless spot on his body, minus his face and head. It lived right below a tattoo of Mary that looked like one of those statues people put out in their gardens. Soon after he’d discovered it, a great sadness came over him, and he couldn’t feel happy unless he thought about what new tattoo he’d get on the empty spot. It had to be great or at least as good as the tattoos he already had. Besides the Virgin Mary on his back, he had one on his chest of Jesus nailed to a crucifix with blood dripping down. His arms were covered with faces of Jesus, crowns of thorns, and chalices; his legs with crosses, angels, and Jesus fishes. He thought of his body as a song of praise to the Lord.

“Tommy, I got to bring the kids to school now,” his wife, Joan, called to him as he was staring at the spot in his bedroom mirror.

“Okay, angel,” he said, “I’ll be right down.” Even in a rush, he was like a slow-moving machine with his strong sturdy body that had once survived a car falling on top of it.

He got to the bottom of the stairs to find his children, Michael and Sarah, standing beside their mother in their maroon-and-gray plaid uniforms.

“Daddy, we have our Christmas party today at school!” Sarah said, her round little face lit up like a carnival ride at night.

“That’s great, little angel, but don’t forget what Christmas is all about,” Tommy said.

“To celebrate the birth of our savior, Jesus Christ,” Michael said, smiling big and holding his head high.

Tommy kissed Joan goodbye and they were off. As soon as they left, he felt tempted to run upstairs and stare at the spot. He thought that if he looked at it long enough, the perfect image might come to him. But the clock on the stove said half past seven and he had to get to his shop by eight for an appointment. He grabbed a plastic travel cup and filled it with what coffee was left in the pot and was on his way. He pulled out of the driveway with his white Chevy truck kicking up dust and dirt, and squinted in the glare of the bright Tucson morning sun.

He arrived at his shop and saw his loyal client, Jim Bob, waiting for him on the porch. The parlor was a small white adobe and it looked more like someone’s home than a business. The inside consisted of two rooms—one in front, where all the images were displayed on the walls, and one in back, where Tommy put tattoos on his clients. They headed straight to the back room, as Jim Bob always knew just what he wanted and didn’t need to look at any images for ideas.

“So what are we doing today?”

“A dragon. A ferocious, fire-spitting dragon.”

“Thought you already had a dragon.”

“I didn’t know there was such a thing.”

“Oh yeah, there is.” Jim Bob spoke as if dragons weren’t fantasy.

“What about a crucifix? Or the Virgin Mary?”

“The Lord ain’t something that can be bought or sold.”

“You hear about the rattlesnake robber?” Jim Bob said, switching the topic.

“Well, he goes around holding people up and instead of a gun, he uses a rattlesnake. Pushes it right in their face.”

“I’m not worried about no rattlesnake robber. I got the Lord on my side.”

“How’s the Lord gonna protect you from a rattler?”

“Well then, how does it work?” Jim Bob turned serious.

Tommy shook his head and sighed and then explained that the Lord kept such tragedies from happening to people like him, so he didn’t need to worry. Jim Bob looked as if he understood completely, but Tommy could tell that nothing was getting through. He was glad that he had Bible study in a few hours, and soon he’d be surrounded by others like himself.

He got to Bible study to find the usual rat-colored folding chairs formed in a circle and one of the members reading from Corinthians. He sat and tried to listen, but his mind drifted into thoughts of images for his new tattoo. He thought of the Last Supper which would have fit perfectly in the empty space. He considered a biblical verse that would have also been a good fit. He thought of angels, crosses and rosary beads. He dismissed them all. None of them spoke to him. He wanted something he could see himself in.

He thought and thought and thought, all through the meeting and on the ride home. As he drove, he watched the brilliant pink sky turn to blue and then to black, and with the blackness, he filled with sadness, heavy and endless. He used to get this same feeling in his younger, darker days when whatever drug he’d taken had worn off.

When he passed a cactus covered in lights, he remembered that it was Christmas and the heaviness inside lightened a bit. He loved Christmas. He had loved it as a little boy, but the holiday stopped being exciting the year he found out that Santa was no more than a story his parents told him to keep him happy. His dad had spilled the beans during one of his drunken rampages. Tommy thought he’d never find happiness in Christmas again, until the December of his twentieth year when he was walking in front of a local parish and he heard the church-goers singing praise to Jesus. Something stirred inside him and rose up, like a brand-new bird that had just learned to fly. He wasn’t raised Christian. He wasn’t raised anything. Still, he felt something he had never felt before, like Jesus was right there talking to him, encouraging him to go inside and join in. So he went inside and joined in the singing. His singing felt like it was burning out all the sin that had been rotting away inside him for years, and the louder he sang, the faster it burned.

With the memory of his past still fresh in his mind, he was more determined than ever to find an image for the empty spot. As hungry as he was, he almost wished he could skip dinner, but he would never miss a chance to break bread with his family.

“You seem distracted today,” Joan said as she put a plate of pork chops on the dinner table.

“Sorry, honey. What did you say?” Tommy said.

“Oh yeah, I have a lot on my mind with work and all,” Tommy said as he tried to think of other excuses.

“Broccoli again,” Sarah said as she sat down.

Dinner was short, but seemed long to Tommy. After dinner, he sat down in the den and began thinking, and for the first time that day, he felt how tired he really was, and despite his efforts to stay awake, his eyelids continued to slide down over his eyes as if forced against their own will. He drifted off, but wasn’t asleep long when he was awakened by Michael, who had fallen and hit himself on a ceramic elf.

“Daddy, I hurt myself,” Michael cried through his tears. He had a red mark on his right knee.

He picked his son up and carried him into the kitchen, where fresh-baked cookies, shaped like Christmas trees and angels were cooling on a tray.

“Can I have some milk with my cookies?” Michael asked.

“Sure, little guy,” Tommy said, opening the refrigerator. He poured his son and himself two glasses of milk and sat down at the table.

A full-size nativity scene sat in the center of the table, complete with the Three Kings, the Star of David, and some sheep. Tommy stared at the scene as though he were seeing it for the first time. And in some ways, he was. He never noticed the familial love between mother, son, and father the way he had at that moment. He looked down at his son, who had quickly forgotten about his injury and been contently eating cookies. He looked at Joseph and then he looked at himself in the reflection of his milk glass. And then it became clear to him. He had found what to put on his empty spot—the nativity scene. He could see himself in Joseph. He was after all, among all things, a father.

He began sketching zealously. He was a good artist and had gotten even better since Jesus had come to him. He took a break from sketching to stare at his reflection in the glass again, and for a quick second, he thought he was seeing Joseph himself.

Grace Mattioli is the author of  Olive Branches Don’t Grow on Trees, Discovery of an Eagle, and The Bird that Sang in Color. These books are available from all major online book sellers, including Amazon, Barnes & Noble, and Apple Books.