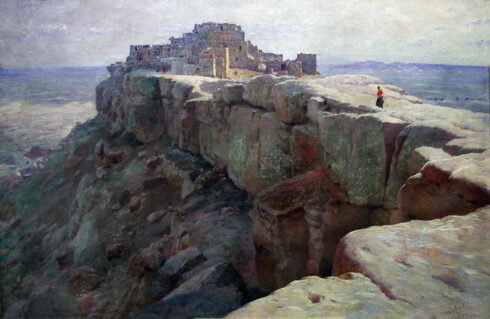 There aren’t many places in the world as sacred as the Hopi Reservation in Arizona. Situated in the Northeastern part of the state and completely surrounded by a much larger Navajo reservation, Hopi was settled in circa 1100 making it the longest continuously inhabited place in the United States.

Crazy Ted advises Cosmo and Silvia to go to Hopi, telling them that they’d be fools to miss an opportunity to go to “the center of the universe.” While there, they encounter locals, including artisans who are impassioned about creating jewelry and crafts, and children who “are happy just to play in the sun.” Cosmo’s touched by how the people in this place seem happy despite the poverty and sparseness in which they live. “Perhaps because its people were so tied to that world beyond sight.” Silvia suspects that the people of Hopi are happy because art is such an important part of their culture. She goes on to say “people who create have an outlet, a way to break free and transcend this crazy world…When I paint, I get in touch with that higher part of myself. I think it’s the world that takes me away from this part of me.”