A Final Picture from the Family Saga, “The Bird that Sang in Color” 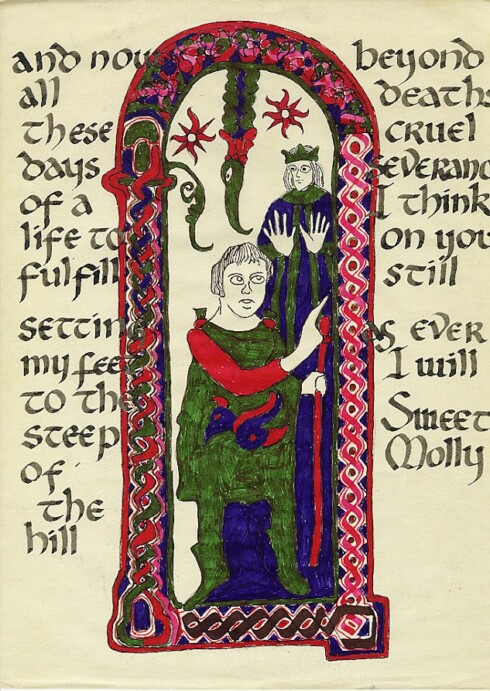 This is the final drawing in my series on the artwork that inspired The Bird that Sang in Color. The words on this drawing are lyrics from a song by Robin Williamson of The Incredible String Band. This pictures is mentioned during chapter four of this literary fiction novel, when Donna is visiting her brother, Vincent. The scene below is from this visit. Enjoy!

From Chapter Four of The Bird that Sang in Color

“Did you see The Lord of the Rings movie?” he asked me as he put a kettle of water on.

“No, I’m not much into cartoons, but I read The Silmarillion.” I couldn’t wait to get this into one of our conversations, but it seemed like he couldn’t care less.

“Did you see the movie though?” He fished a cigarette butt out of an old Maxwell House can he was using as an ashtray and lit it.

“Yeah.” He grinned, and his eyes glimmered with a self-possessed zaniness. “Sixteen times!”

“Sixteen times. Wow.” That may have been the most pathetic wow I ever spoke in my life. All I could think of is how he should have been spending his time making a better life for himself—not seeing the same cartoon movie over and over.

“Sometimes, I’d just sit in the movie theater after the first showing and watch it again.”

“You never got sick of it?”

“Sure,” I said, grateful for being able to delay what I came there to tell him—that I would be marrying Frank in a few months. I didn’t want to tell him because I felt guilty for getting on with my wonderful life while he was stuck in one of Dad’s apartments, alone, working at a cookie factory, and smoking cigarette butts. I tried telling myself that I shouldn’t feel guilty, that I was living the life I set out to live, that this was the life he chose, and if he just cleaned himself up, he’d look like a goddamned Italian movie star and would have been able to get everything—a good job, a house, a nice lady, and eventually, children. But all that self-help talk didn’t help, and my guilt bubbled over like a chemistry experiment gone wrong.

I didn’t think I’d be marrying Frank so soon, although I knew he was the one after he had a motorcycle accident, and I went to visit him in the hospital. It’d happened a few months after we’d started dating. In his drugged-out state, with eyes half-closed, he’d mumbled to me, “When I woke up in the hospital, I didn’t know what was happening or even where I was. All I cared about was seeing your beautiful face again.” His eyes shone through his bruised face. His broken leg, wrapped and elevated, hung like a part of himself he’d forgotten about. He’d gone on to say that when the doctor had told him he might walk with a limp for the rest of his life, he didn’t care about that either. He’d just cared about seeing me again. He’d sounded like a desperate love song, but I was touched and moved beyond words.

Vincent turned off the screaming kettle, made two cups of Darjeeling tea, and brought them to the table. We left the kitchen and went into the TV room to start the movie. This was the main room in the place, and it was crammed full of all things Vincent: various stringed instruments, some displayed like trophies; a rainbow of crystals, with one big crystal ball prominently positioned in the center; two bookshelves crammed with Bibles, Bible concordances, Castaneda, star guides, sheet music, everything Tolkien ever wrote with some things in duplicate, books on saints and the tarot. The same leather-bound album cases he had in his room in our old house were on his floors, along with cassette tapes alphabetized and stacked inside wooden cases. On his walls, a small crucifix hung beside an even smaller round picture of Mary, which was next to drawings he made with markers. The one of Fingolfin was beside another with two Medieval monks standing under an archway, calligraphic words on either side of it that read: “And now all the days of a life to fulfill, setting my feet to the steep of the hill, beyond death’s cruel severance I think on you still, as ever I will, Sweet Molly.”

He started the movie, and I was surprised to find that I immediately got into it, and it even got my mind off everything. Vincent said it was really true to the books, and nobody would know better than him. After the movie, we were both hungry, and I offered to take him out for some pizza, but he said he had plenty of food and got out a can of tuna fish, a baguette, and some olives.

I was about to tell him my news right after we started eating, but I stalled, making small talk about light tuna versus albacore and how I preferred the light—which was what we were eating—to the albacore, even though most people were the other way around. I then went on about how I was giving up meat and only eating fish.

“You know I’m not religious,” I said, thinking of how I’d probably have to get religious as soon as I started having kids.

“Maybe you can be,” he said, getting ready to say something funny with a smile that reached across his face, a slanted head, and hands on his hips. “You can be a member of the tuna fish religion.” He laughed heartily at his own joke, and I joined him, but my laughter was weak and joyless.

“Yeah, that sounds like a good religion for me.” I could feel the fake smile on my face fading fast.

“But say you’d have to pick a religion to practice,” he said, turning semi-serious. “What would it be?”

I looked up at the ceiling and said, “I really can’t think of any. Maybe if the Romantic Poets formed a religion, I’d be into that. They were really into being anti-establishment and pro-individualism and—”

“Yeah.” He waved his hand in the air dismissively. “They sound like a bunch of hippies.” He laughed and asked me how I liked the movie.

“I loved it. It flew by. Now I want to read the books. I only ever read The Hobbit and The Silmarillion.”

“Oh yeah,” he said, paying less attention to my mention of this book than he did the first time I mentioned it. I really hoped for a more enthusiastic response from him for reading this book, especially considering I read it mostly, so I could talk to him about it. “So, what was your favorite part of the movie?”

“Mm, hard to say.” I knew this answer wouldn’t do.

“Ah, I really liked the scene with the elf lady in white.”

“No really,” he said, turning serious. “I met her on the bus on my way home from college one day.”

“Did she have curly ears that point up?” I said, smirking.

“Kind of. And she was really tiny too.”

“So, why’s an elf taking the bus, anyway? Shouldn’t she be running through some forest with a bow and arrow?”

“No, really, Donna. She was telling the truth.” He wore a mystery smile that turned into a laugh, and I wasn’t sure what to think.

“You’re spending too much time in Middle Earth,” I said. At this, he laughed like a madman, and I told myself that this would be as good of a time as any to tell him about me and Frank getting married.

“So, I kind of have some big news. I’m getting married to Frank.” I spoke quickly, announcing my major life-changing event like I was talking about the price of tomatoes.

“In a few months. I would have told you sooner, but it’s going to be a really small thing. Just our two families and a couple close friends. We’re not having any of that cornball wedding party stuff or else you know you’d be in it.” Frank and I both thought big weddings were so impractical and preferred to save our money for a down payment on a house, rather than spend it on one day of festivities.

“Bring him over, and I’ll crack out a bottle of Bailey’s.”

“Really?! That’d be great, Vincent. Thank you so—”

“Oh no!” he said suddenly. “We should go outside and see if there are any bats flying around. I saw a couple last night. This is the time they come out.”

We went outside where it was hot and dewy, and my clothes stuck to my skin. The sky glowed pink with hints of soft blue coming through in places. Crickets sang, and an occasional car drove by slowly, songs playing from their radios, warping in the wet heat. We stood in the most open space we could find, so our view would be unobstructed and arched our backs to look up at the sky like something magnificent was going to occur. We watched for bats until it turned completely dark, and we were ready to hang it up when we spotted one, and then another. Their wings were white flickers against the blackness. The moon shimmered on Vincent’s face while his eyes were joyfully transfixed on the bats flying through the sky like little frenzied kites.

This post is part of my latest blog series on the artwork that inspired the family saga, The Bird that Sang in Color. The art featured in these posts comes from a sketchbook that belonged to my brother, Vincent, which I discovered shortly after his death. It had pictures he’d drawn of himself throughout various phases of his life. This pictorial autobiography caused me to wonder what pictures I’d have of myself by the end of my life, which motivated me to live more fully. In writing this novel, I was able to share this powerful realization with the world.

Grace Mattioli is the author of  Olive Branches Don’t Grow on Trees, Discovery of an Eagle, and The Bird that Sang in Color. These books are available from all major online book sellers, including Amazon, Barnes & Noble, and Apple Books.