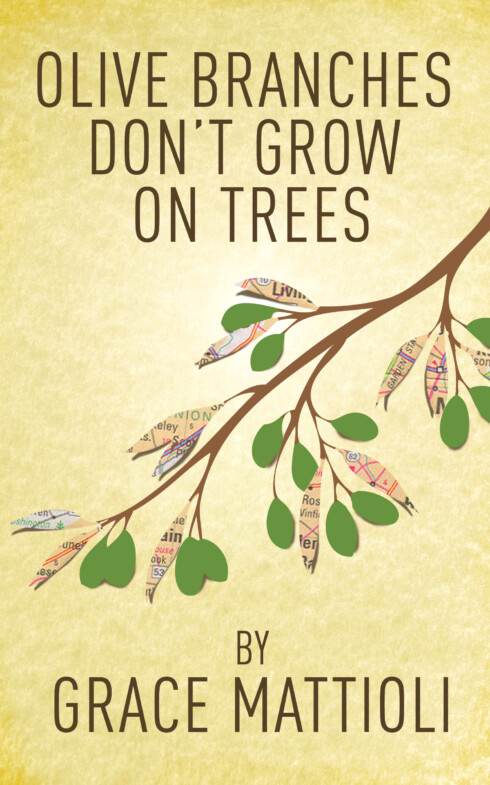 Drawing on her own background, Grace Mattioli has created a warring but loveable Italian-American family, who just can’t seem to get along. While they all have their individual problems, youngest daughter, Silvia Greco, hopes that she can bring the family together to celebrate the graduation of her little brother, and in so doing offer an olive branch of peace to the disgruntled factions. What follows is an energetic, funny, and endearing tale of a twentysomething woman with an incurable need to keep moving, but without any real sense of direction. As she finds her own way, so too she hopes to help her family put their problems aside. This story is the first of Grace Mattioli’s Greco Family Trilogy books. Get your FREE copy at Amazon or any other major online booksellers today!

“The author…manages to make us care about this family. All of the Grecos…are entertaining and their quirks are endearing. OLIVE BRANCHES DON’T GROW ON TREES is a very real drama that gets to the heart of the conflict within the Greco family.” Indie Reader Reviews (5 Stars)

“The author weaves a tale that is a moving and realistic portrayal of a dysfunctional family with enough drama and humorous family situations that will keep the reader engaged and entertained, while providing a witty sense of humor and subtle messages of life lessons to extend the olive branch and learn to live, love and forgive.” Jersey Girl Book Reviews

“The sequences of Silvia’s recollections into the past with her strong willed, born ahead of her time grandmother, the jobs she has held, and lost as it were, are nothing short of brilliant.” Chapters and Chats Book Reviews

Silvia Greco knew the silence wouldn’t last. Any second, her dad would emerge from the bathroom and resume his search for a lost frying pan, with the sound of clattering pots and slamming cabinet doors ringing through the air like a series of small explosions. In the very short meantime, she enjoyed the quiet as she sat waiting for her coffee to finish brewing as if it was all she had left in the world.

She sat at a square wooden table that took over the entire room. It looked good from a distance, but upon closer inspection revealed several nicks and scratches that gave it a memory of its own—a bad one. The table was bare except for an economy sized bottle of TUMS displayed in the middle like a centerpiece. She sat on a chair that was almost too big for her little body.

She was a big girl misplaced inside a little girl’s body with a big voice, a big laugh, a big stride, a big Roman nose that sat proud beneath her big brown eyes. Her big head of hair was currently chopped in some crude style of uneven lengths and colored orange on the top and black at the bottom. Her hair style wasn’t intended to be any sort of radical statement. It was just due to her current state of apathy. So was her attire—a paint covered T-shirt and worn-out Levi jeans that fit her like a puddle.

She usually dressed in bright bold sixties-style clothing that showed her off to the world as an animated, free spirit. Her hair was usually evenly colored and styled like she cared. But even with her grungy clothes and her chopped hair, she was pretty. And her big nose seemed to add to her prettiness in a strange way. Angie, her older sister, urged her to get her big nose made smaller with simple surgery, but Silvia refused to do such a thing, believing that doing so would be rejecting her Grandma Tucci, who had the same big nose and whom she loved fiercely.

Her dad’s nose was in perfect proportion to the rest of his face, which resembled that of an aged Marlon Brando. Despite a lifetime of working too hard, sleeping too little, drinking too much, and smoking for the better half of his life, Frank Greco still looked good. He had all his hair and could sweep it from side to side depending on his mood. His physique looked as if he worked out at a gym on a regular basis, but in fact, he’d never set foot in one. The slight limp he developed from being maimed in a motorcycle accident in his early twenties was barely perceptible through his gargantuan personality. This was also the case with his slovenly attire of mismatched outfits and shirts buttoned unevenly with one side hanging down further than the other. Fortunately, he worked as a judge in a local courthouse, so he could hide his lack of style behind a thick, black robe.

He came out of the bathroom and wasted no time getting on with his project with a renewed sense of urgency, gallivanting around the kitchen as if he was keeping beat to a polka song. He searched for the lost pan while drinking and cooking something that smelled like a mixture of garlic and garbage left out in the rain. Silvia got up to get her coffee, careful not to get in her dad’s way. As she poured some milk into her cup, the greasy container slid out of her hand. She imagined that Frank touched it with his olive-oiled hands.

“I knew you were going to do that,” Frank, who was suddenly standing over her shoulder, said. She wanted to say something like “Well, maybe I wouldn’t have spilled it if you didn’t get your greasy hands all over it,” but she said nothing. She just cleaned up the spill and sat down. She could tell Frank was fishing for a fight this morning and would have fished deeper had he not been so preoccupied with finding the lost pan. So rather than fishing, he just continued on his quest, moving from one side of the kitchen to another as if he was accomplishing great things. Banging steel against steel, wood against wood.

The noise sounded like crashing cars to Silvia, but it did serve the purpose of disrupting her thoughts of yesterday when she was fired from her job waiting tables in a Turkish cafe in downtown Philadelphia. She’d overheard her boss say to the cook, “I’m going to have to close the place down if she works here another day!” At hearing this, she marched into the kitchen and said, “I heard what you said, Usef.” She spoke to him as though he was wrong for being concerned for the survival of his business. Although he was, like most people, much bigger than her, he hunched over and shrunk like a frightened monkey at her confrontation. “I’m sorry Silvia.” His sincere apology made her feel bad. She also felt bad because she knew his concern was legitimate. She knew she was a coffee-spilling, plate-dropping wreck of a waitress who’d surprised herself the few times she’d got an order right.

“Why were you still working there anyway after you moved in with Dad?” her older brother, Cosmo said to her when she called him up right after she’d been fired. As usual, he was right. It made some sense to continue her career as a bad waitress when she still lived in the city, and the cafe was one block away from her apartment. But after she moved into Frank’s house in New Jersey, it made no sense at all. She remained at the cafe, however, because jobs were hard to come by. When she told this to Cosmo, he said that she’d find another dead-end job before she knew it. His attempt at consolation, while sincere, made her feel worse. Much worse.

She crumbled into a hunched over position and sipped her coffee that tasted markedly bitter. Just as she was slipping into a comfortable state of misery, Frank said, “Don’t you have to be at work? It’s eleven o’clock. What happened? Did you get canned again?” She was about to speak, when he swiftly picked up a broom and began chasing a centipede that was speeding across the floor.

Available in eBook, paperback, and audiobook